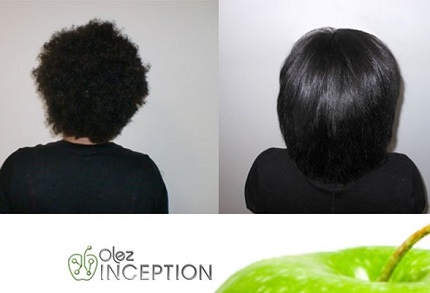 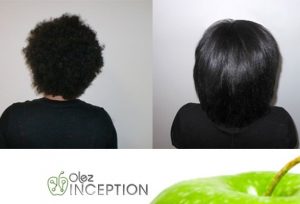 When South Florida native Kayla came into our office on that particularly HUMID day in May, she had no idea she would be trying out the most revolutionary breakthrough technology in the beauty industry. Her hair was definitely feeling the humidity; It was FRIZZY, dull, and very tangled. She had been wearing her hair in a natural afro for years–not for the love of Afros (because I’m totally down with Afro love!) but she was afraid of the damage caused from harsh relaxers and, if anyone lives here in South Florida knows, a flatiron does nothing in this humidity.

Almost three months later, Kayla cannot stop raving about her hair to me! Enough already, Kayla, I get it: Apple Stem Cell ARE the best discovery since sliced bread. (Just kidding, don’t stop raving!) Her hair has gone from too kinky to comb to soft and silky with “beautiful soft Spanish curls,” adds Kayla.

The Apple Stem Cells penetrate the hair and deliver hydrogen, phytonutrients, antioxidents and proteins,while also restructuring the hair’s curl pattern. Because Apple Stem Cells have an exceptionally long life, INCEPTION continues to work inside the hair, allowing the results to last for up to 6 months.

Olez INCEPTION, a professional hair care line that incorporates the use of Apple Stem Cell technology will be available to salon professionals July 22.